Our previous article on decision trees dealt with techniques to speed up the training process, though often the performance-critical component of the machine learning pipeline is the prediction side. Training takes place offline, whereas predictions are often in the hot path - consider ranking documents in response to a user query a-la Google, Bing, etc. Many candidate documents need to be scored as quickly as possible, and the top k results returned to the user.

There are three methods we'll focus on here:

We'll show that choosing the right strategy can improve evaluation time by more than 2x - which can be a very significant performance improvement indeed.

All code (implementation, drivers, analysis scripts) are available on GitHub at the decisiontrees-performance repository.

Superficially, decision tree evaluation is fairly simple - given a feature vector, recursively walk down the tree, using the given feature vector to choose whether to proceed down the left branch or the right branch at each point. When we reach a leaf, we just return the value at the leaf.

From now on, we'll focus on the C++ implementation, and how we can speed this up.

This approach has a few weaknesses - data cache behavior is pretty-much the worst case, since we're jumping all over our memory to go from one node to the next. Given the cost of cache misses on modern CPU architectures, we'll most likely see some performance improvements from optimizing this approach.

A nice trick to improve cache locality is to lay out data out in a flattened form, and jumping in between locations in our flattened representation. This is analogous to representing a binary heap as an array.

The technique is just to flatten the tree out, and so moving from the parent to the child in our child will often mean accessing memory in the same cache line - and given the cost of cache misses on modern CPU architectures, minimizing these can lead to significant performance improvements. Thus our

We implement two strategies along this approach:

Our implementation is given below:

A really cool technique that has been known for years is generating C code representing a decision tree, compiling it into a shared library, and then loading the compiled decision tree function via dlopen(3). I found a 2010 UWash student report describing this technique, though the earliest reference I've seen is from approximately 2000 in a presentation on Alta Vista's machine learning system (which I unfortunately cannot find online).

The gist of this approach is to traverse the trees in the ensemble, generating C code as we go. For example, if a regression stump has the logic "return 0.02 if feature 5 is less than 0.8, otherwise return 0.08.", we would generate the code:

For example, here is the code generated by a randomly constructed ensemble with two trees:

The core C++ function used to generate this is given below:

For evaluation, we just use the dlopen and dlsym to extract a function pointer from the generated .so file.

We can examine the evaluation time of each strategy at a fixed tree depth and number of features, and see that at these levels, we have that the compiled strategy is significantly faster. Note that strategies scale roughly linearly in the number of weak learners, as expected. 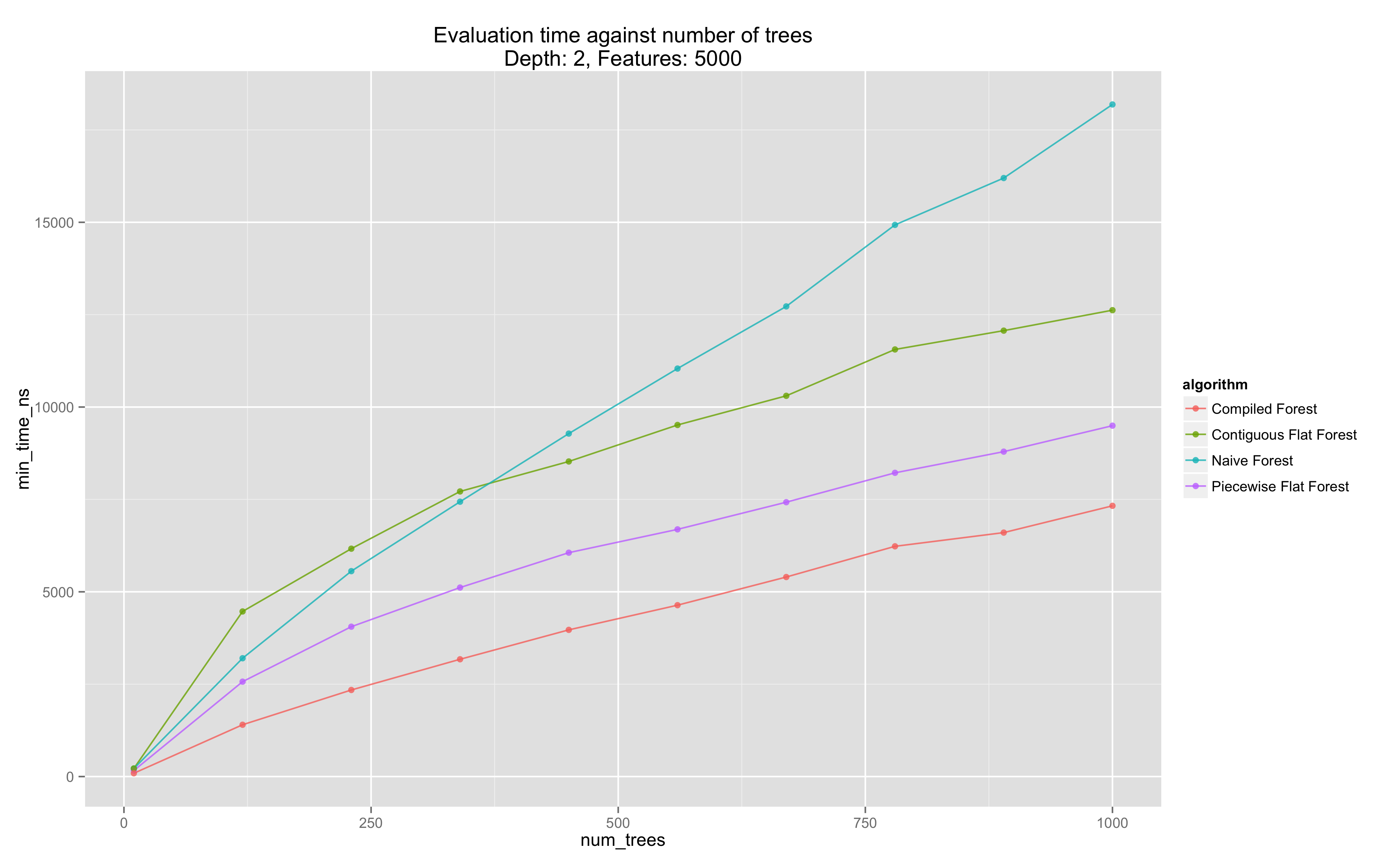 As the student report indicates, the relative performance of each strategy depends on the size of the trees, the number of trees, and the number of features in the given feature vector.

Our methodology is to generate a random ensemble with a given depth, number of trees, and number of features, construct the evaluators of this tree for each strategy, and measure the evaluation time of each strategy across a set of randomly generated feature vectors. (We also check correctness of the implementations via a QuickCheck style test that each strategy computes the same result for a given feature vector).

We look at trellis plots of the evaluation time against number of trees, for the various evaluation strategies. 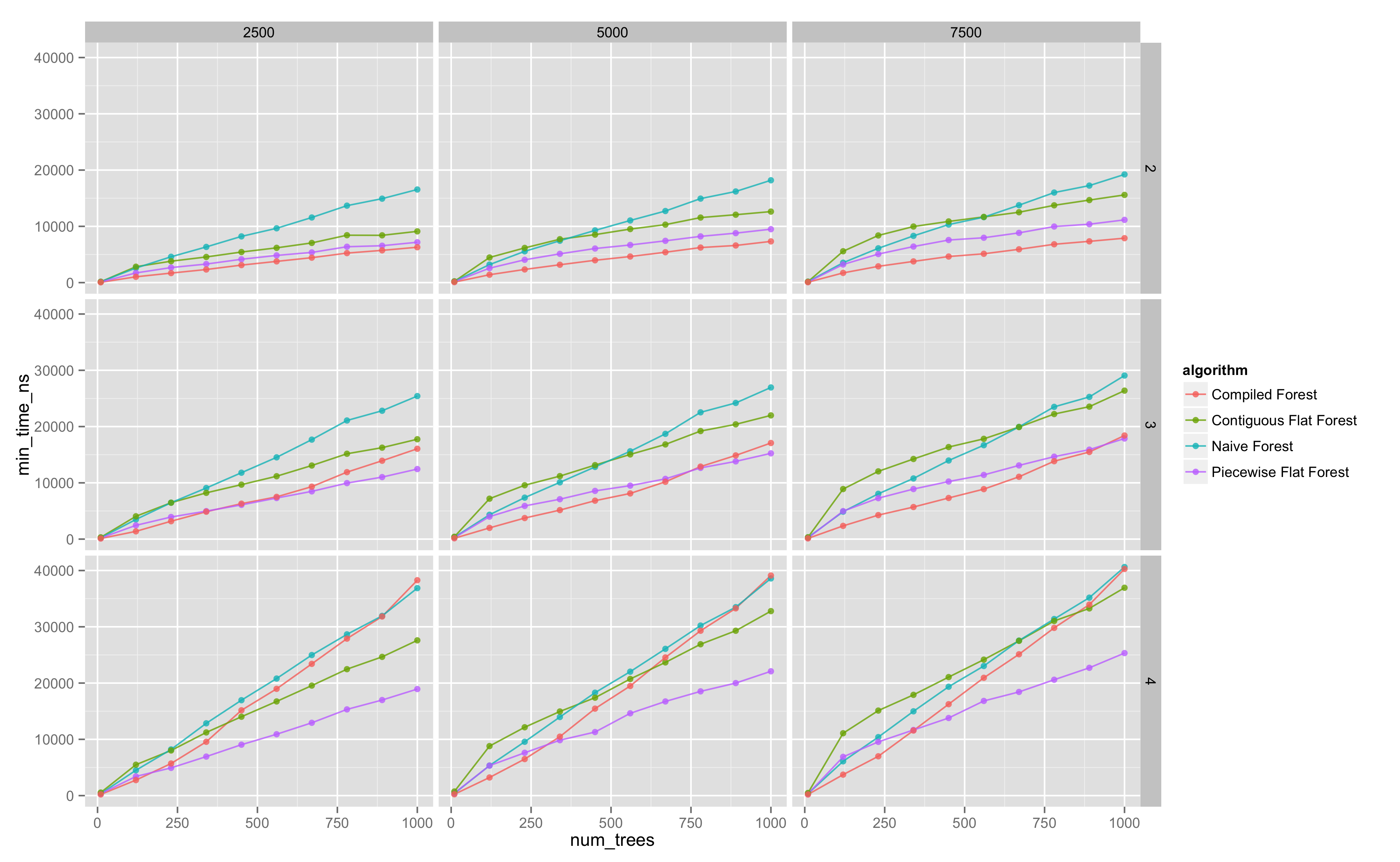 The following diagram is the entire parameter space explored (click for more detail).

(as an aside - the R formula syntax is a great example of a DSL done right.)

We see $R^2$ values ~0.75-0.85 with all coefficients, with almost all coefficients statistically different from zero at the 0.1% level - so we can draw some provisional inferences from this model.

We've implemented and analyzed the performance of a selection of decision tree evaluation strategies. It appears there are two main conclusions:

Next, I'll look at implementing these methods in some commonly used open-source ML packages, such as scikit-learn.